The Soviet Union produced a range of airplanes during the Cold War era, from flawed to the occasionally fantastic, the sleek to the bulky and clumsy.

One that stands out is the Tupolev TU-144, aka “The Conkordski,” an obvious copy of the Concorde then nearing completion. The TU-144 was the first transporter to fly supersonic and the first commercial aircraft to break the sound barrier. But it’s glory was short lived.

The design of the plane was flawed and it suffered from instability in flight. At the 1973 Paris Air Show the plane broke up in mid-flight and plummeted to the ground in front of the crowd. That ended its career as a passenger plane. The plane continued to be used as a cargo plane but it was incredibly unreliable. It suffered 266 failures in only 180 hours of flying time, and ceased operating in 1983.

At the other end of the spectrum, is the Antonov AN-225, otherwise known as “Mriya” (meaning “dream” in Ukrainian).

“It is not possible!”
-the pilot of the An-225 upon seeing the plane for the first time

28 years after it was built, it remains the largest aircraft ever built. Where the TU-144 was sleek and fast, the 225 is fat and beefy, with an appetite for swallowing up oversized and overweight cargo, like trains.

The Antonov is named after its designer, Oleg Konstantinovich Antonov, a Russian born near Moscow in 1906. Antonov built his first plane, a glider, at 17 years old. At 50 he designed the world’s largest turbo prop plane, the An-22. In the mid 70s he designed a heavyweight workhorse, the Antonov An-124.

The following year the Antonov Design Bureau began designing a plane based on the 124, only bigger, the Antonov An-225, which  was designed to carry the Soviet shuttle “Buran.” While the basic design is similar, the 225 is beefier and has 6 engines instead of the 124’s 4. These engines generate 300,000 lbs of thrust. The 225 also has more wheels, 32 to be exact, which spread its immense load so it doesn’t “break” runways.

The 225 flew its maiden flight Dec 1, 1988. In just months it broke 109 world records, including the records for range, altitude, and cargo capabilities. 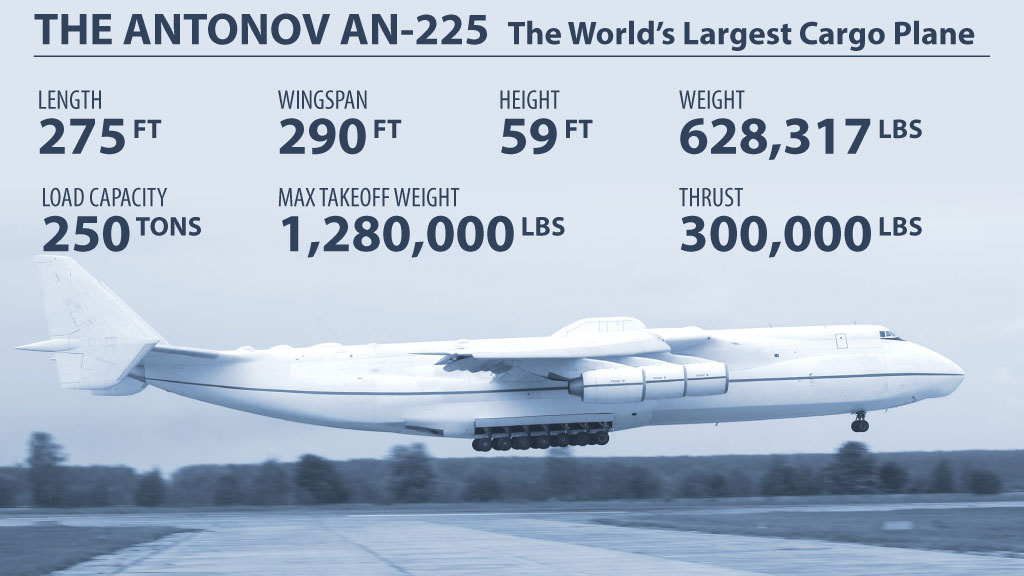 After the collapse of the Soviet Union, funding for the 225 dried up and the 225 was abandoned and cannibalized for parts. That would have been the end of it, but the Antonov Design Bureau took a lesson from the West and turned capitalist.

They created Antonov Airlines and marketed their AN-124 fleet for carrying heavy, oversized cargo. It was a hit. The 124 carried everything from trains to 737 fuselages. The services of the Antonov Airline were in such demand, that after 8 years of lying dormant, engineers at Antonov decided to resurrect the gigantic An-225.

The 225, the only one in existence, would now be flying as a commercial plane, so not only did it have to be restored, it also had to be updated with the latest equipment and pass numerous tests before it could be certified for commercial flight.

It successfully achieved certification in 2002. In 2009 the 225 was renovated and modernized again, and it continues to fly to this day.

This heavyweight of the heavens can carry just about anything. Need to FedEx a train across the globe – check.  50 cars? Check. Wind turbine blades? Check.

For some stunning pictures of the 225 in action, visit the Antonov Company website. There’s also a documentary below covering the history of this incredible plane.