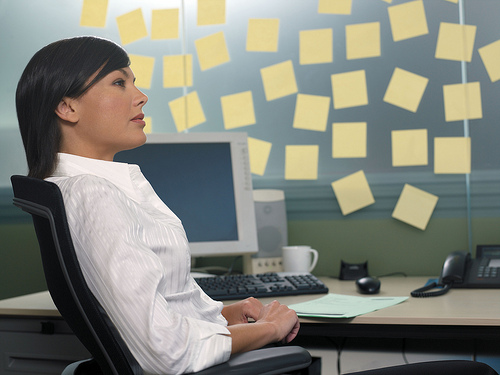 The  word “accountability” is being thrown around quite a bit nowadays. Whether you’re working as a project team member, or involved in the day-to-day management of your supply chain, no doubt you’ve talked about accountability (or “ownership”

or “responsibility” or one of a dozen other words that mean the same thing).

Is assigning accountability as easy as adding a few bullet points to someone’s job description? We often hear people say things like: “I’ve been given accountability for getting this system implemented” or “Management has made me accountable for getting people trained”.

But those are just words. Can accountability really be given, or must it be taken? Throughout history, you’ll find that the true champions of reform didn’t change the world because their bosses told them to. After seeing the need for reform, they were compelled to actually DO something. To willingly take the burden of change upon their shoulders and make it happen.

In the business world, Tom Peters refers to these folks as POPs (Pissed Off People). His view is that nothing noteworthy ever gets done without someone who is so utterly revolted by the stupidity of the status quo that they feel they just can’t sit on their hands any longer. They MUST change it before they go completely berserk! In an interview, Tom was asked what one trait he would look for when hiring a prospective employee. His answer: Fury.

Still unconvinced? Consider the following: Every CEO in America is accountable for managing the company’s assets to the best of their ability to maximize value for shareholders. That’s not just a part of their job description, that’s their WHOLE job description. When anyone agrees to become a CEO of a company, this is the accountability they are given.

Now think about Dennis Kozlowski (Tyco), Bernard Ebbers (WorldCom) and Kenneth Lay (Enron). They were CEOs, so they were “accountable” to shareholders by definition. But did the accountability really exist? It may have been given, but was it truly accepted by these three?
Contrast this with Fred Smith, the CEO of FedEx. As a result of the shenanigans of the likes of Kozlowski, Ebbers and Lay, the US government now requires CEOs to personally sign off on the financial statements of the companies they run. When this was new requirement was first announced, a mad scramble ensued among America’s largest publicly traded corporations to make sure that their books were in order.

But not at FedEx. Within hours of this measure being officially announced, Fred Smith put his signature on his company’s financials, without fuss or fanfare. He didn’t need to double check to make sure the books were in order. The books have ALWAYS been in order as long as he’s been running FedEx. In the case of FedEx, the CEO has accepted his accountability to shareholders with gusto. Way to go, Fred!

The point is that the words “It’s my accountability” are meaningless without the actions to back it up. Accountability only happens when someone is a “true believer” in something. They are willing to invest themselves and put their own blood, sweat and tears into doing what’s right – no matter how unpopular it may seem.

In fact, an easy way to recognize these people is that they rarely use the word “accountability” when describing what they do – they let their actions do the talking. They generally prefer to leave the labeling activities to people who seem to think it’s important.

So if trying to assign accountability is ineffective, how can you get people to take the initiative and get some great things done?

First, if this is really the behaviour you want people to exhibit, then you have to start hiring for it. Attitude beats aptitude. Make sure your hiring process looks for people who tried something big, whether they were successful or not.

If a prospect comes in with a letter of reference stating that they “take direction well”, then give them the bum’s rush!

Second, it never hurts to lead by example. If you’re a manager who looks at reports,
bemoaning the results all the live-long day, then what message do you think this sends to the rest of the organization?

If you don’t get off your duff and really TRY to right some of the wrongs in your company, then the best you can hope for is mediocre results and, ultimately, a career that’s not really worth remembering.

You know what needs to be done. Stop waiting for someone else to take the accountability. As the saying goes, if you want something done, you have to do it yourself.