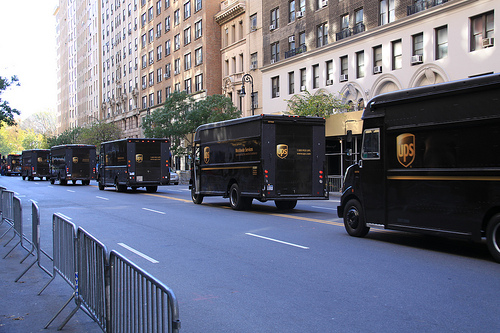 Last week’s Supply Chain Digest contained a nice piece on what went wrong behind the scenes at UPS and FedEx when they were forced to admit to customers that they  would be unable to deliver thousands of Christmas presents on time. You can read the whole thing here, but I’ve excerpted the most important part of the piece below:

In UPS’ case, the bottleneck appears to be the number of aircraft it had in service, which was not enough to meet the last minute volume spike. UPS had been forecasting an 8% average rise in its daily shipping volumes during the holidays versus 2012. However, ecommerce sales in the last weekend before Christmas jumped by 37% from the year before, according to data from IBM Digital Analytics. On Monday Dec. 23, growth in online orders spiked by 63%, according to Mercent Corp….Retailers such as Toys “R” Us Inc. and Dick’s Sporting Goods told customers they could place on-line orders as late as 11 p.m. on Monday, Dec. 23 and receive goods by the end of day on Tuesday.

Although article also notes that weather was partly to blame, it is clear that the primary cause is the shocking speed at which consumers  are adopting online shopping at the expense of traditional brick and mortar stores.

The story reminded me of a few recent posts that have appeared on this site, and if you missed them the first time, might be worth a read. The first is “Virtual Orchestration Highways: The Next Big Thing in Logistics?“:

The best example for how virtual highways work comes from the airline industry. Let’s say you want to buy a plane ticket from the U.S. to Australia. You prefer to fly American Airlines because of your frequent flier miles, but American doesn’t fly to Australia. You’re out of luck, right? Of course not—as anyone who flies knows, airlines have formed alliances among themselves in order to provide a far larger travel footprint than any single airline can. Thus, you can book a ticket to Sydney solely with American Airlines’ website, but since it doesn’t fly to Sydney one of its partners (in this case, Qantas) will carry you for part of the route. Seems simple, but actually such a seamless experience is only possible because of extensive work on the back end to integrate multiple airlines’ booking, schedules, rates, and routes information—all of which are subject to minute-by-minute changes. It’s a pretty amazing arrangement when you think about it, and yet as consumers we take it for granted that buying a ticket halfway around the world with multiple carriers should be this easy.

Similarly, in the virtual highways I’m describing, enterprise customers are able to source products anywhere in the world and fulfill them to anywhere. Meanwhile, behind the scenes, suppliers and transportation providers use the virtual highway’s underlying common network backbone to seamlessly work together to fulfill these orders.

More recently,  a post called “Three Stocking Stuffers Every CEO Wants” had this to say:

This seems obvious if you’re a retailer, but even manufacturers and logistics providers are realizing that to succeed in the coming years they’ll need to be able to see and respond more quickly to actual end-consumer demand. This means the whole chain, from the retailer to the raw material suppliers, are all working together to give the end-consumer what he or she wants.  Companies that are taking this approach are experiencing dramatic increases in consumer sell-through revenue.

The SC Digest article is further evidence that we are living in an increasingly consumer-driven world, where the companies that can best satisfy the consumer will thrive. Given that being consumer-driven requires  a rethinking of traditional technology approaches and “best practices”, the transition won’t always be easy, but the payoff can be well worth it.

How is your company adapting to this consumer-driven world?